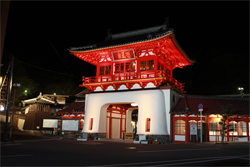 Takeo Onsen is an ancient hot spring described in 'Hizen Fudoki' (description of the culture and climate of Hizen province) as being "a hot spring in the west of the province surrounded by rough terrain and off the beaten path".

Many famous people such as thy lord of the Saga Domain, Musashi Miyamoto and Philipp Franz von Siebold are said to have bathed here.

The symbol of Takeo Onsen is the red-coated Romon (two-storied gate) which evokes the feeling of Ryugu-jo, the mystical ocean castle. This gate was designed in 1914 by Kingo Tatsuno, who was born in Karatsu city, Saga prefecture, and is famous for designing the red brick Tokyo Station building. 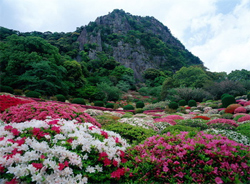 Mt. Mifune in Takeo city is also known as 'Mt. Karafune' (which literally means 'Chinese ship') due to its resemblance to one. Mifuneyama Rakuen is a garden which sprawls out on the western foot of this mountain. It was built over a period of approximately 3 years by Shigeyoshi Nabeshima, the 28th ruler of the Takeo Domain, as part of his villa. In spring the park is reminiscent of a Shan Shui painting, with 5,000 cherry blossom trees and after, 50,000 azaleas all bloom against a backdrop of the rugged cliff of Mt. Mifune.

* Rock climbing, mountain climbing, etc. are forbidden in Mifuneyama Rakuen as it is designated as a registered monument of Japan. 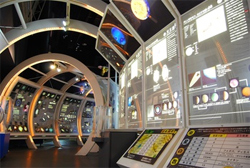 * The museum is tentatively closed due to seismic reinforcement and will reopen in early July 2015.

The eye-catching exterior of the building was designed to resemble a spaceship awaiting takeoff from a space station.

The exhibits are so elaborated that visitors can learn about the Universe, the Earth and Saga as well as their relationship to each other. Also, a variety of science classes and shows are held. On the third floor, a planetarium equipped with a state-of-the-art projector, with the capacity of 200 seats is able to reproduce the night sky of countless glittering stars in three-dimensional outer space. From the observatory, one can watch the spectacular sun, planets and stars.  Offering many hands-on experience programs which are enjoyable like playing games, the museum cultivates curiosity towards science from visitors of all ages, children to adults, and enables them to encounter the wonderfulness of discovery and creation. 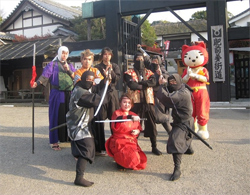 Ureshino is famous for its hot springs and for its history as a flourishing post station along the Nagasaki Kaido, which joined Kokura and Nagasaki. Hizen Yume Kaido has recreated the atmosphere of Ureshino as it was back in the Edo Period.
As soon as you step under the checkpoint, you will see characters from famous Japanese period drama "Mito-Komon" or even a ninja, princess or samurai.

The 'Hizen Yume Kobo' is a popular facility where visitors can paint their own piece of pottery. Enjoy making a one-of-a-kind plate or mug designed by you.
We recommend watching 'Gen-san' - Japan's No. 1 Bogus Street Performer, as he puts on an Edo Period performance including acts such as 'Selling Grease' and 'Nankin Tamasudare'. 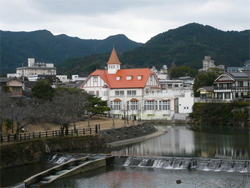 Ureshino Hot Springs Public Bath 'Siebold-no-yu' (30 min.) Ureshino hot springs public bath, 'Siebold-no-Yu' began operation on April 1, 2010.
The Taisho-style, gothic building called 'Siebold-no-Yu' is two-stories high and approximately 750 square meters in size. Situated on the other side of the river from Ureshino Onsen Park, this building has been restored to its original orange, stylish appearance, which revives Ureshino's history.
Inside there is a common bathing area, private baths for rent, a citizens' art gallery and more, making a great place of relaxation for tourists and locals alike. There is also great accessibility in the form of a multipurpose bathing room with just a few steps, a bathroom allowing wheelchair access and so on, so anyone can come and enjoy.
VIEW MORE