Get off at Gofuku moto machi bus stop 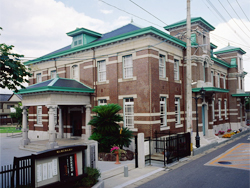 Saga City Cultural Museum (60 min.) Yanagi town along the Nagasaki Kaido is an area with many historical buildings representative of the castle town of Saga. Here you will find the Saga Historic Folk Museum where you will feel as though you have travelled back in time to the good old days. Inside this retro-looking building you will find historical and folk documents about Saga from the Meiji and Taisho Periods, which make this building a great place to learn about Saga's history and culture.
VIEW MORE 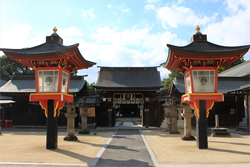 Saga Shrine and Matsubara Shrine (60 min.) Saga Shrine is like an oasis in the center of Saga city. Its foundations were laid in 1933 and it is well known as it enshrines Naomasa Nabeshima and Naohiro Nabeshima, the 10th and 11th lords of the Nabeshima Domain.
Some 350,000 people visit the shrine for New Year every year, but on normal days the shrine has a secluded, quiet and holy atmosphere.
Close by, Matsubara Shrine built in 1772 is even older than Saga Shrine. Here are enshrined the ancestor of the Nabeshima Domain, Naoshige Nabeshima, the first domain lord, Katsushige Nabeshima and the daimyo Takanobu Ryuzoji.
Starting from Saga Shrine and visiting all of the seven shrines on the same grounds at New Year's is becoming quietly popular as "the seven shrine pilgrimage". 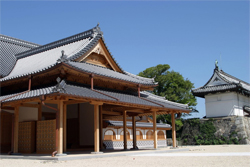 Saga Castle History Museum (60 min.) Saga Castle History Museum, inside the prefectural historical site of Jonai, Saga city, is a faithful reconstruction of a part of Saga Castle's honmaru (main keep), which existed at this site at the end of Edo Period.
It prides itself on being one of the largest reconstructed wooden buildings in Japan and offers an easy-to-understand introduction of Saga's attractiveness and energy during the fall of the Tokugawa Shogunate, a time in history which paved the way for Japan's modernization.
The building is surrounded by historic landmarks such as a tenshudai, the castle moat, and Shachi no Mon  (or the Killer Whale Gate), which is a designated Important Cultural Property of Japan. Together, these make up a fascinating space that will give you a taste of the atmosphere at the time.
VIEW MORE 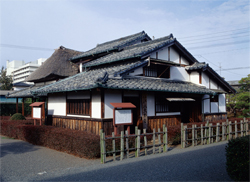 Okuma Memorial Museum (60 min.) Shigenobu Okuma, founder of Waseda University and twice prime minister of Japan, was born in Saga and is considered one of the seven intellectuals of Saga. The samurai-style home where Shigenobu was born still remains. There are only a small number of samurai residences built in the Tenpo Period (1830-1844) which remain standing today, and this old residence is designated as one of Japan's historic sites. After the Meiji Restoration, Shigenobu displayed his skills as a politician and built the foundation for modern Japan. The Okuma Memorial Museum adjacent to the former family home exhibits precious mementoes and documents through which visitors can learn about Shigenobu's footprints. There is also a Chinese black pine tree in the grounds of Kodenji Temple in Saga city named after Shigenobu's childhood name of "Hachitaro".
VIEW MORE 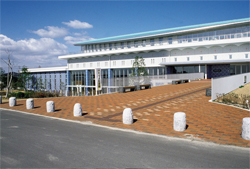 The TSUNETAMI SANO Memorial Museum exhibits actual materials such as historical documents and personal effects of Tsunetami Sano, another of the seven intellectuals of Saga. At the same time, it features a 3D model of Saga Domain's Mietsu Navy School, a timeline, an image hall utilizing multi-vision technology and more to introduce Tsunetami's accomplishments in an easy-to-follow yet impressive way.
The adjacent site where the Mietsu Navy School once stood, began as Saga Domain's Ofunate Keikosho (navy school) which was established in 1858 and consisted of a training ground, ship-building facility and other such buildings. It was also the place where Japan's first practical steamboat, Ryofumaru, was successfully built in 1865.
At this site, a wooden river wall structure was found in an excavation and further analysis confirmed that these are Japan's oldest dock ruins in existence today. This is a precious relic that demonstrates the modernization of ship-building and is one of the items among the Modern Industrial Heritage Sites in Kyushu and Yamaguchi, which are aiming to be registered as world heritage.
VIEW MORE