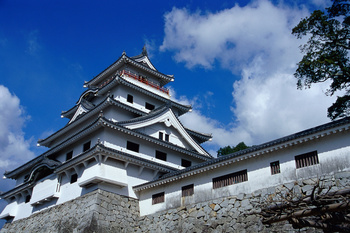 Karatsu Castle, a symbol of the city, was constructed in 1608 after seven years of construction beginning in 1602 by the first lord of the Karatsu Domain, Hirotaka Terasawashimanokami. Karatsu Castle was built on an island called Mount Mitsushima, connected to the mainland by land and the castle keep was in Mount Mitsushima. Inside the castle were walls built of stone and a moat. After the abolition of feudal domains and the establishment of prefectures in 1871, the castle was abandoned and the remains of the main enclosure of the castle was transformed into Maizuru Park. The present building was restored in 1966 as a cultural and tourist facility. The 5-story castle tower towers over the sky of Karatsu. The castle is also called Maizuru Castle since the castle tower is likened to a head of a crane and the pine forests growing to the left and right of the castle resemble a crane spreading its wings. The castle houses invaluable materials and weapons that bear evidence of centralized feudalism, materials related to the Karatsu-yaki wares, as well as archaeological and historical resources. The fifth floor of the castle tower is an observatory offering a commanding view of the Sea of Genkai and the Matsuragata region. To get to the castle tower of the Karatsu Castle, visitors can walk up stone steps or take an elevator. The Maizuru Park located on the periphery of the castle is a famous spot to view cherry blossoms and wisteria flowers when they are in full bloom. The Karatsu Castle is illuminated at night, making for a gorgeous sight to behold.