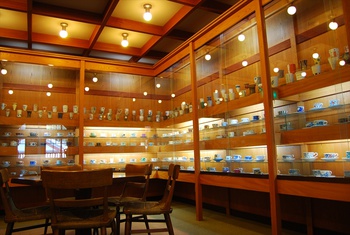 Aritakan Interactive Plaza for Traditional Culture is the first place in the world where one can see Karakuri puppets made from ceramics.
The key attraction is the puppet theatre starring puppets made from the famous Arita-yaki pottery. Based on a folk tale told in the Arita region, “The Defeat of the Giant Serpent of Mount Kurokami", a puppet theatre lasting around 7 minutes is performed in Kabuki style. The puppets made from Arita-yaki pottery, which are a crystallization of Arita traditional techniques and cutting-edge mechatronics, are definitely worth seeing. Enjoy watching the sagas unfold with 10 puppets appearing in succession, including Princess Manju and samurai Minamoto no Tametomo. The first floor of Aritakan exhibits works by famous Arita potters such as Ryuzan Aoki, Manji Inoue, Imaemon and the Sakaida Kakiemon potters. The second floor has a cafe corner (rest area) where visitors can enjoy a cup of coffee served in the cup of their choice made from either Arita-yaki, Meissen-yaki or Keitokuchin-yaki.