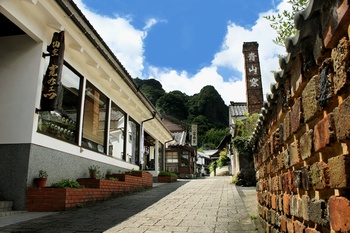 Ookawachiyama, located in the town of Imari, used to be home to the Nabeshima domain Kilns, which produced a number of masterpiece porcelains such as "Iro Nabeshima", "Nabeshima Sometsuke" and "Nabeshima Seiji" under the domain's strict control. Surrounded by mountains on three sides, the area has a distinctive atmosphere of secret kilns, much like a landscape featured in Shan shui painting.
There is Nabeshima domain Kiln Park situated in Ookawachiyama, which beautifully reproduced the old checking station that protected the potting secrets, the remains of ascending kilns such as Okyo Ishi Kama (Sutra stone kiln) and the Kiyohara Kiln, and the houses of potters. The historical cultural heritages including the remains of old kilns and various ceramic objects found on mountain roads blend in with the surrounding nature and peaceful neighborhoods. The must-do attraction here is to visit the Meotoshi Tower to hear the sound produced by fourteen wind chimes made of the Imari-yaki pottery. The clear sound that has been chosen as one of the Japan's most attractive sonic soundscapes, softly and beautifully reverberates through the secret kilns of Ookawachiyama. Ookawachiyama is lined with chimneys and pottery studios that are built with bricks, giving a historic and traditional atmosphere dating back some 300 years. In spring, the Pottery Studio Fair is held from April 1 to 5 and the Furin (wind chime) Festival is held in summer from June 19 to August 31 (TBD). Fall also features a festival called the Nabeshima Domain Kiln Fall Festival, which is held from October 31 to November 15.