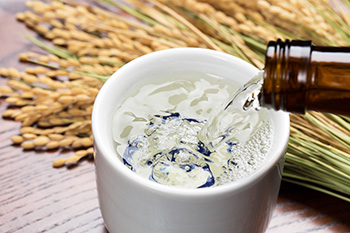 Due to the fertile soil on the Saga Plains, Saga Prefecture is one of the leading rice producers in Japan and has many old sake breweries. Within the island of Kyushu, Saga is considered “The Sake Prefecture” due to its thriving sake brewing industry. There are approximately 30 sake breweries all around the prefecture, and sake produced here can be purchased at various stores in the prefecture.
Among the various types of sake produced in Saga, those for which taste and quality is guaranteed are called “The SAGA certified sake”. These sakes have received the experts’ seal of approval for everything starting with ingredients, brewing method, taste and aroma and are known as national-class Saga-made special sake.
In 2011, at the biggest international wine show, the International Wine Challenge (IWC), awarded the Saga-made Nabeshima-Daiginjo the Champion Trophy, the highest award in the Sake category. 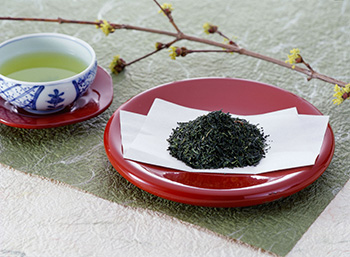 The pure water and fertile land in the foggy Ureshino Basin create top-quality green tea. Tea cultivation in the area has a long history and appears to have started about 550 years ago. The 'Kama-iri Matcha' produced only at Ureshino is highly valued. It has a unique fragrance and refreshing taste. On the other hand, the most common type of Ureshino green tea, the “Steamed Curled Leaf Tea” produced with a special formula has a strong fragrance and mild taste. Ureshino also makes a slightly sweet Japanese black tea that is easy to drink straight. Its gentle taste is a perfect match for Japanese traditional sweets and can be enjoyed with milk or lemon.