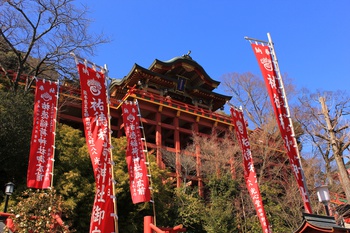 Along with the Fushimi Inari Shrine and Kasama Inari Shrine, the Yutoku Inari Shrine is known as one of Japan's three major Inari and fondly referred to as "Yutoku san" by the locals. Built in 1687, the Yutoku Inari Shrine was given a division of a shrine's tutelary deity from the Inari Okami that sat neatly on the Kazan-in estate located in the Kyoto Imperial Palace when Kashima's Lord Naotomo Nabeshima married his wife, Princess Kazan-in Manko from Kyoto. The contrast of the vivid vermillion color of the buildings and the surrounding greenery is truly impressive, while the main architecture, including the main shrine, front shrine and the two-storied gate, is completely coated in lacquer. The main shrine stands tall with a backdrop of a stone wall mountain and there is a two-storied romon gate and Kagura Hall situated on the spacious shrine grounds at the skirt of the mountain. The Yutoku Inari Shrine is also fondly called "Chinzei Nikko", meaning Nikko of the Kyushu region. Worshipped as the ancestral god of food, clothing and shelter, as well as the guardian god of rich harvests, good business, family prosperity, large fish hauls and traffic safety, the shrine is visited by more than 2.8 million every year. The shrine holds rituals including a spring festival named Tamagae on April 8 and an autumn festival named Ohitaki on December 8. In addition, the outer garden of the Yutoku Inari Shrine is part of Higashiyama Park, a famous spot for viewing azalea flowers. The park is filled with nearly 50,000 stocks of blooming azalea flowers during the season.
The adjacent Yutoku Museum houses treasures of the Yutoku Inari Shrine, as well as creations made from Kashima Nishiki, yoroi armors and swords used by the successive feudal lords of the Kashima Domain and many other works of art.

● Access:
From train station: Get off at Hizen-Kashima Station on the JR Nagasaki Main Line, get on Yutoku Bus bound for Yutoku Inari Shrine at Kashima Bus Center in front of the Station, get off at Yutoku Inari Jinja Mae stop and walk for 5 minutes
10-minute taxi ride from Hizen-Kashima Station on JR Nagasaki Main Line
Car: 30-minute drive from Nagasaki Expressway Takeo-Kitagata IC

● Admission Fees to Yutoku Museum: 300 yen for adult, 200 yen for university and high school student, 100 yen for junior-high or elementary school student; discount applicable to groups of 20 or more people