China On The Park

China On The Park 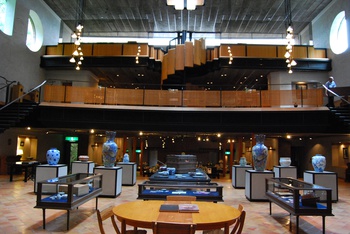 Known as the most prestigious Arita-yaki pottery production factory, Fukagawa Seiji, began production of Arita-yaki in 1650 and by 1910 had been designated as an official purveyor to the Imperial Household Agency, delivering porcelain wares to the Imperial family and branches of the Imperial family. The China on the Park is a park opened on the factory premises of the Fukagawa Seiji. With a relaxed ambience, the inside of the brick-colored building is divided into three sections.
The Chuji Kan specializes in treasures collected by a pottery producer, the Fukagawa Family, who has nearly 350 years of history. A store located on the first floor displays and sells beautiful porcelain wares and its open display setting allows people to choose by holding Arita-yaki wares in their hands directly. A rest lounge located on the second floor is a perfect place to relieve your fatigue from walking.
If you want to look for a terrific bargain on pottery wares, visit the store Jikigura that sells items below the standard. It is a recommended spot to purchase souvenirs for you and your family. Another attraction is a section where visitors can try porcelain painting. There are also small stores lined up like a flea market including Ippai Ya specializing in sake wares, Sometsuke Ya specializing in blue and white porcelain, and Tsubo Ya selling flower vases.
When you get hungry, the restaurant Kurinto makes for a perfect place to get the taste of delectable Saga Beef and seafood caught in the Sea of Genkai served in original pottery wares. The China on the Park is also famous for its lavender garden, which is rare for the Kyushu region. Every year from the end of May to early June, the park becomes paved with nearly 4,000 lavender flowers, creating a beautiful purple carpet.

● Open every day except between December 30 and January 1. The restaurant and Gallery Chujikan are closed on Tuesdays