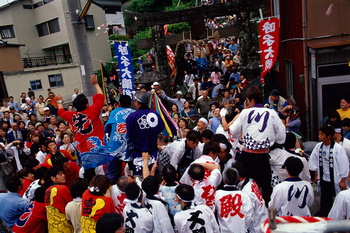 This is a traditional festival which began in the times of the Bunroku and Keicho invasions on Korea (1592 - 1598), when Hideyoshi Toyotomi, in order to boost the morale of his soldiers stationed at Nagoya Castle, had Kiyomasa Kato and Masanori Fukushima divide their troops to the east and west respectively and play tug-of-war using rope from a warship. Originally held on the former Boy's Day, now it is held for two days in June on the first Saturday (for children) and Sunday (for adults). The townspeople divide into "okagumi" (hill team) and "hamagumi" (beach team) and men and women, young and old, play tug-of-war with a huge rope 15 cm in diameter and 400 m in length. The pulling begins with the sounding of a gong and a fire arrow, and if the hill team wins it is said the year will produce abundant crops, while if the beach team wins, it is said there will be great hauls of fish that year. The tiles on the surface of the road where the tug-of-war is held bear patterns representing the hill team (abundant crops) and the beach team (great haul), and the three lines are the center line which determine who wins and who loses.

● Access:
From train station: Get off a train at Karatsu Station on the JR Karatsu Line and Chikuhi Line, get on a bus bound for Yobuko at Oteguchi Bus Center (takes about 30 minutes), and get off at Yobuko Bus Terminal.
Car: About 60-minute drive from Kyushu Expressway Taku IC