Botan to Midori no Oka Park

Botan to Midori no Oka Park 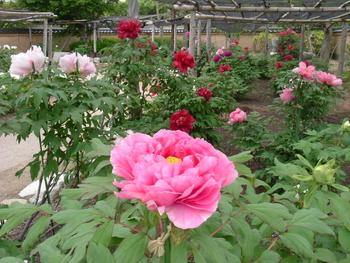 Botan-to-Midori-no-Oka is a park named after the "Kirigo Botan" legend of Hata, who ruled this land around 400 years ago, and his wife. A Japanese garden designed in a hill-and-pond circuit style, the park is packed full of 5000 peony consisting of 109 different species, and 30,000 Chinese peony, consisting of 30 species. 30,000 in total. There are other beautiful flowers to be enjoyed throughout the year, such as plum, sakura and hydrangea. Beside the garden is "Kodomo-no-Mori", with various athletic play equipment and "Mura-no-Hiroba", which is a rest area designed with a farm feel. Moreover, at the top of "Miharashi-no-Oka", above terraced fields lined with stone, sits a giant stone statue called "Shishi-no-Mori". This is the perfect place to bring a lunch and spend all day with the family.

● Access:
From train station: Get off a train at Karatsu Station on the JR Karatsu Line and Chikuhi Line, get on a bus bound for Takakushi, Irino, Hoshika or Nouso via Kirigo at Oteguchi Bus Center, get off at “Botan to Midori no Oka Iriguchi” stop, and walk for 3 minutes
Car: 60-minute drive from Nagasaki Expressway Taku IC