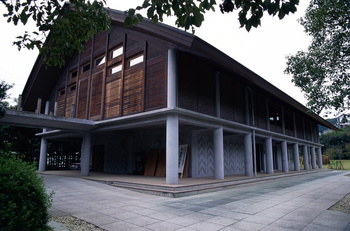 The Japanese people first began growing rice towards the end of the Jomon Period in northern Kyushu, and Nabatake Site is said to be Japan's oldest rice paddy. Carbonized rice, a stone knife to cut rice stalks and other items have been found at this site. It is also known that this site was used to grow grains such as millet, soba, soybean and wheat, fruit and root vegetables, as well as to raise pigs as livestock.
Matsurokan exhibits the articles which have been unearthed from Nabatake Site as well as related material, and explains about world rice production and its dissemination in an easy-to-understand way. Iseki Park has been established as a place for citizens and tourists alike to relax and mingle with other people, featuring restorations of a pit-dwelling, Japan's oldest rice paddy, and a Jomon forest. By coming here, you will certainly feel that the origin of rice in Japan is Karatsu.

Origin of "Matsurokan"
Gishi Wajin Den, an ancient Chinese account of Japan, talks about a land called Matsuro on the way to Yamatai-koku where Priest-Queen Himiko ruled. This land of "Matsura" in the Karatsu region flourished based on interaction with the continent of China, so much so that it became known by the imperial ruler of China. The name "Matsurokan" comes from what the Chinese referred to as the "Land of Matsuro".

● Closed: Mondays (or the following day if a Monday falls on a public holiday) and December 29 - January 3