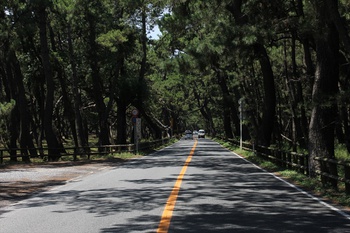 Niji-no-Matsubara, stretching along the Karatsu Bay coastline, is designated as a national scenic beauty spot and is considered one of the three greatest pine forests of Japan together with Miho-no-Matsubara and Ama-no-Hashidate. Niji-no-Matsubara is approximately 5 km in length, 1 km wide and made up of around 1 million Japanese Black Pine trees. Its history dates back as far as the beginning of the 17th century when Hirotaka Terasawa, the first lord of the Karatsu domain, started planting pine trees on the dunes along the coastline for protection against the wind and tide. Niji-no-Matsubara is also famous as a place surrounded in seven mysterious legends, which are described below.